$8 STANDARD SHIPPING ON ALL DOMESTIC ORDERS

A group of mixed gender young adults find themselves sharing a living space in a major American city because rent is simply too high a cost to carry alone.

Add to their on again/off again crisis of coexistence stressors such as contract work, surprise healthcare and strictly lateral moves made at their unspecified administrative desk job and what you have is the recipe of a happy-go-lucky sitcom.

Realistic as these facts of life are, the backdrop in which they unfold is not.

The Struggle is (sort of) Real

Whether set in the heart and soul of the 1990's, or in the blue bubble era, these television shows have been best known to entertain us through their most powerful production; the bottle episode.

A bottle episode of programming entails most if not all filming done while the gang remains together on one particular set. Nine times out of 10, that set is the "we have to live together, and we have to live here" apartment.

It's during these zeroed in on episodes that we begin to notice things. We notice things like how all five people in the room can share one couch. Five people on a couch is not a poverty trope but the opposite. We're all sitting on this couch because we can. Because it is an oversized, sectional, congac leather couch and based on those ajectives alone, should retail at a cool $4,000. The TV we watch while we sit on the couch just bit the dust and no one has the money to deal with it right now but thats fine. We're sitting on a four thousand dollar couch.

But beyond the astronomical couch cost, the 18ft ceilings and the lottery-like "it was here when we got here" teak credenzas, there exists one (of many, I'm sure) near unnoticed detail conflicting with the set of yuppie struggle.

The grapes. The nothing more than a sizable knicknack seen time and time again in coming of age television. The grapes find themselves on bookcases and console tables taking up space as a piece of nothing more than miscellaneous, "we don't have any money to decorate" accoutrimonds selected in effort to depict the relatable crashpad of late twenty-somethings.

The real story behind this obscure countertop craft is far more meaningful than we brush it off to be. Lucite grapes are a thing.

Oversized grape tchochkes came into our lives as a design trend at mid-century. Though their lucite makeup would lead one to believe they are of 80's decor, they were infact all the rage as early as 1950. The work comes to us often affixed to a beachwood vine and in a myriad of colours unlike its inspiration.

Today, lucite grapes are priced well into the hundreads as vintage retailers are becoming hip to the mid-centruy modern trend and its rarity.

"The real story behind this obscure countertop craft is far more meaningful than we brush it off to be. Lucite grapes are a thing."

The backstory on the grapes is short, sweet and dates back to early Mormon Folklore. The Relief Society put together by the LDS Church in late 1950 was a philothrampic and educational gathering place for women belonging to the Morman community. In effort to keep tabs on mental health, the women would craft to keep their minds and bodies in healthy practice. Resin grapes quickly became a favourite among the crafters and and not long after, an iconic piece of workmanship. 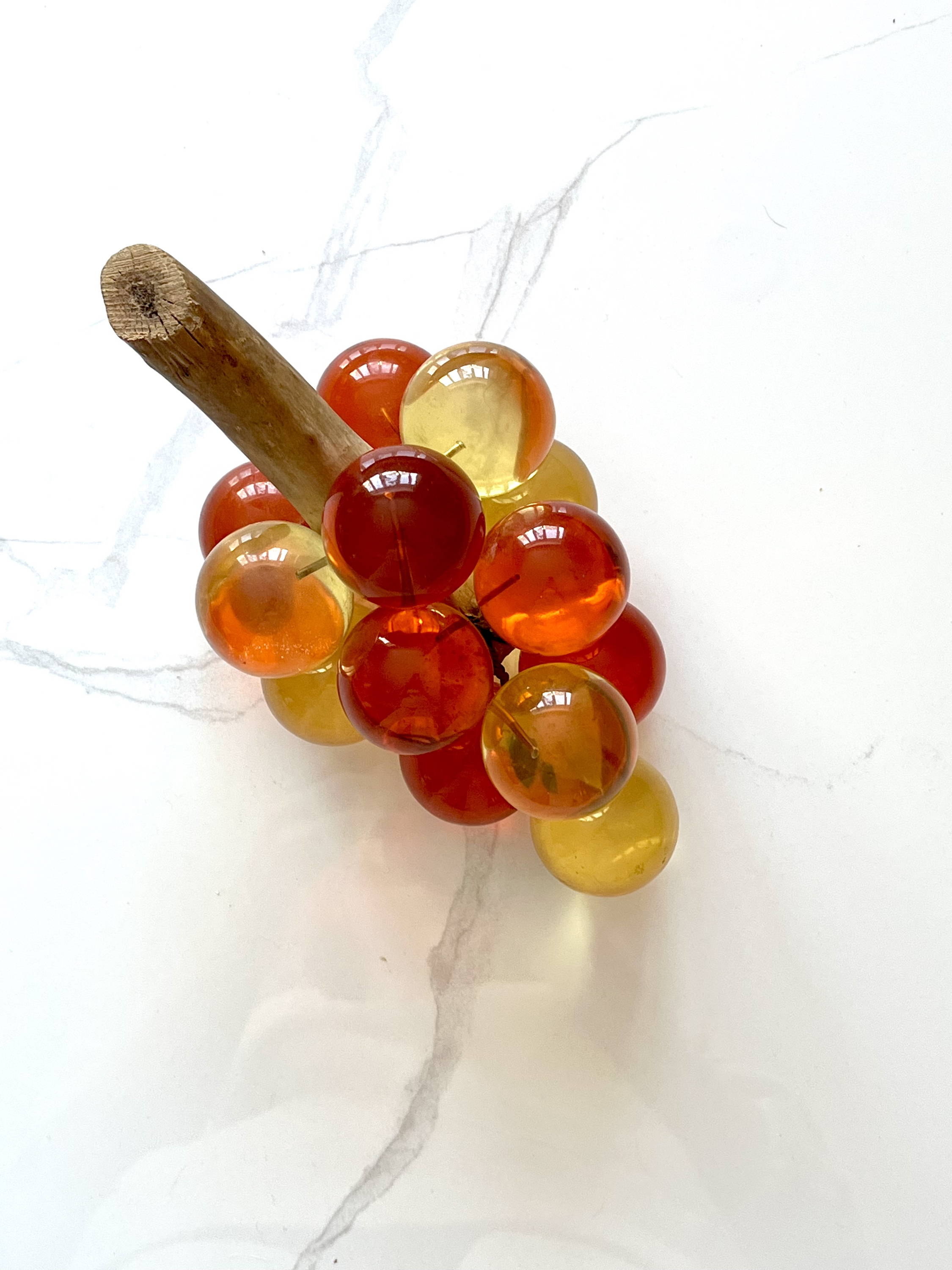 While lucite grapes have been known to show face on the set of primetime television backdrops while financially inept characters deal with their day-to-day, so concludes they are a misleading detail.

As far as mid-century modern goes, lucite grapes are as signature as it gets. Not only do they catch the light and illuminate countertop, but they serve as a reminder that mental health is real and one way to manage yours is by keeping busy with your hands; a tale old as time.

Shop our good & our Grapes HERE.